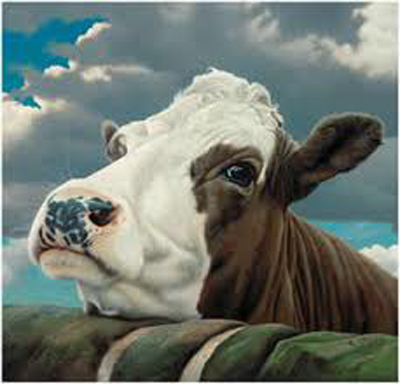 The discovery coincides with release of the “microbiome” – the most comprehensive census yet of the species of bacteria that live in and on the human body. By providing an inventory of bugs that live in 18 sites on the body in healthy people, the Human Microbiome Project should enable researchers to explore how disease might result from perturbations to the microbes, similar to those observed in the mice fed milk fat.

Eugene Chang at the University of Chicago and colleagues gave mice milk fat, lard or safflower oil to see how it would alter the spectrum of bugs living in the gut. The mice were genetically engineered to mimic inflammatory bowel disease, unable to make a protein called interleukin 10 which normally damps down inflammation.

To their surprise, the researchers found that in mice fed the milk fat, Bilophila wadsworthia – bacteria that are normally extremely rare – became much more common, rapidly multiplying from practically zero to 6 per cent of the species found in the gut. The bacteria produce substances that irritate the gut lining and make it more porous, admitting immune cells that trigger inflammation.

Milk fats are hard to break down, requiring much higher-than-usual concentrations of sulphur-rich bile from the liver. Because B. wasworthia makes its energy by consuming sulphur-rich food, it thrived.

“We’re hoping to use this information to prevent or treat this disease,” says Chang. “We can hopefully re-shape the gut microbiome to make it healthier,” he says.

“The wadsworthia bacteria survived only in the mice eating the milk fat,” says another member of the team, Suzanne Devkota, also at Chicago. “When we stopped feeding them milk fats, the bacteria disappeared,” she said.

Chang says the finding tallies with other studies which found that B. wadsworthia thrives when people have blood poisoning, a burst appendix or abscesses. He thinks that the bacteria might trigger inflammatory bowel disease, but that other factors take over and sustain it once the disease has been initiated.

It is too early to say whether avoiding milk fats would help alleviate or prevent the disease in people, though. “First, we want to study humans to see if they respond in a similar way to the mice to these diets,” says Chang.

Meanwhile, the origins of many diseases may become clearer thanks to the first comprehensive census of the entire human microbiome, reported in two papers in Nature and 12 papers in the open-access PLoS journals, as well as a collection of papers in Science.

The investigators who produced the papers catalogued the bacterial species that colonised 18 different sites in the human body, using samples from 242 healthy individuals aged 18 to 40 in the US.

“Knowing which microbes live in various ecological niches in healthy people allows us to better investigate what goes awry in diseases thought to have a microbial link, like Crohn’s disease and obesity,” says George Weinstock, associate director of the Genome Institute at Washington University in St Louis and one of the Human Microbiome Project’s principal investigators.

They found that microbial cells outnumber native human cells by 10 to one, and collectively have 8 million genes compared to just 22,000 in humans. Of the 10,000 species identified, the most diverse range lived on the skin. Bacteria that colonise the teeth are different from those in saliva, and the vagina hosts the simplest range of bugs.

Among the many new insights, researchers found that bacterial populations in the vagina change when a woman is pregnant. Another team discovered that the range of microbial species growing in different parts of the body is probably dictated by the nutrients produced there through normal bodily functions.

One thought on “Milk fats – clue to Inflammatory Bowel Disease”