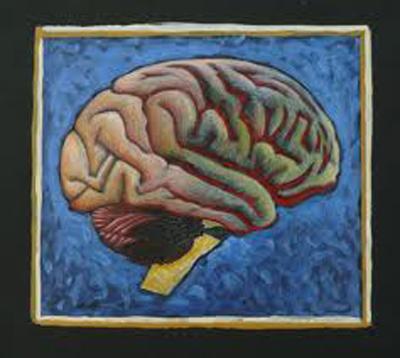 BACK pain has a mysterious link with brain damage. Brain scans have shown that patients with chronic lower back pain have lost grey matter from two brain areas. Scientists are not yet sure whether this is the cause of back pain or the result, but the finding could lead to new drug treatments for backache that target the brain rather than the back or spine.

The discovery was made by Vania Apkarian of Northwestern University in Chicago, when he and his colleagues scanned the brains of 26 patients who had suffered lower back pain for at least a year. Some had damage to their sciatic nerve, which emerges at the base of the spine, while the others had no known injury. The team found that all the patients had lost grey matter in two brain regions known to be important in pain perception.

The affected regions were the dorsolateral prefrontal cortex, involved in emotional processing and behavioural control, and the thalamus, which relays sensory information to the cortex. The total tissue loss was around 1.3 cubic centimetres for each year the patient suffered pain. For a typical patient, this is equivalent to the effect of ageing 10 or 20 years, the team say in The Journal of Neuroscience (vol 24, p 10,410).

Apkarian and his colleagues previously showed that people with chronic back pain perform poorly in emotional decision-making tasks, ones that call for some “gut instinct”. This kind of reasoning is also mediated by the dorsolateral prefrontal cortex. He suspects the damage mainly affects inhibitory neurons that normally damp down the emotional distress caused by pain.

It is not clear whether the tissue loss occurs before or after the back pain, however. “We don’t know how much the atrophy is a predisposition and how much is a consequence,” says Apkarian. He suspects that the pain of an injury causes the brain damage, and that in turn causes further pain.

Paul Strutton, a neuroscientist who studies motor control and back pain at Imperial College London, says the finding could explain why back pain often persists. “It could explain why chronic pain is difficult to treat and can become irreversible,” he says.

“I believe there is more to it than injury to the nerves and muscles in the back.”

Strutton’s team has already shown that there are changes in the motor signals sent from the brain to the muscles of the back in people with chronic back pain. And animal studies reveal that chronic pain can trigger long-term rearrangements of the neurons in spinal nerve circuits. But Apkarian’s study is the first to find structural changes in the brain.

Apkarian hopes to find out whether the damaged areas can heal. He doesn’t know whether the tissue has simply shrunk and can grow again, or whether the problem is irreversible cell death.

The good news is that his team has also discovered a promising painkiller. Animal tests of a tuberculosis drug called D-cycloserine, which boosts neural activity in the cortex, suggest that it could also relieve chronic pain. And because the drug already has an established safety record in humans, Apkarian hopes human clinical trials could start soon.